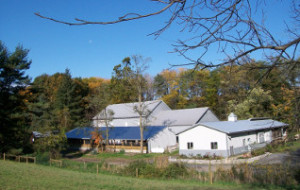 The farm, consisting of 190 total acres, about 90 of which are forested, was purchased by Harold Biddle in 1959 for $17,000.00, but was in poor repair.  The barn was restored and an addition was added, the out buildings were repaired or replaced and beef cattle were raised.  A new house was built in 1970 from recovered brick that was originally part of a State College livery stable (the Pugh street parking garage now stands there).  In 2002 farm operation was taken over by current owners Jeff and Claudia Biddle.  In 2005 the beef cattle were sold and the farm was converted into a grass based dairy.  In 2009 we received our permit for raw milk sales.  In the summer of 2010 the third generation, Becky and Matt Rohrbaugh, returned to the farm to help with daily operations.

Barn: Originally built in about 1835. Hay, straw and machinery are stored in the in the upper level. While cows are bedded in the bottom level.

Heifer/calf barn. Young cows stay in this barn until they are old enough to join the adult cows. There are also 2 smaller special care pens, which are used predominantly for birthing and new borns.

Spring house: The oldest building on the farm built in the late 18th or early 19th century, there are gun slots to protect against Indian attack.