10 Questions about your current milk

If knowing the answers to these questions is important to you consider pure, grass based raw milk. 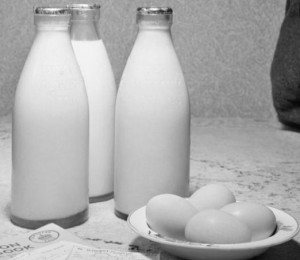 Ultra-Pasteurized Milk: What does it mean?
Raw Milk Facts
A Campaign for Real Milk?
Rawmilk.org

Raw milk is the natural unaltered milk usually from cows, goats or sheep but in some countries it is camel or buffalo. It is not heated above the animal’s highest body temperature which is usually 101-105 degrees F. (38 degrees C.) Raw milk is not pasteurized, homogenized or frozen, nor has it been altered with additives, chemicals, light or homogenization.

Processed dairy is any dairy that has been altered from its raw state by heating the dairy above a cow’s body temperature. Pasteurization, irradiation, boiling or homogenization are the most commonly known forms of processing. Also, the processes of chemical treatment are used to enhance flavor, fortify and preserve bad-tasting milk that has been heat-treated and putrefactive. The common store type of milk is processed to the extent it turns blue. They add large amounts of dolomite (mined calcium carbonate, that is rock) to make it white and add irradiated hydrogenated vegetable oil as Vitamin D. Hydrogenated oil has the same molecular structure as plastic unlike natural raw milk. Additionally, irradiated oil is not Vitamin D yet the FDA allows them to call it that. The following processes are used to treat dairy:

All of these processes destroy or damage the wonderful nutrients in raw milk.